Notes of a Naturalist - February 2021 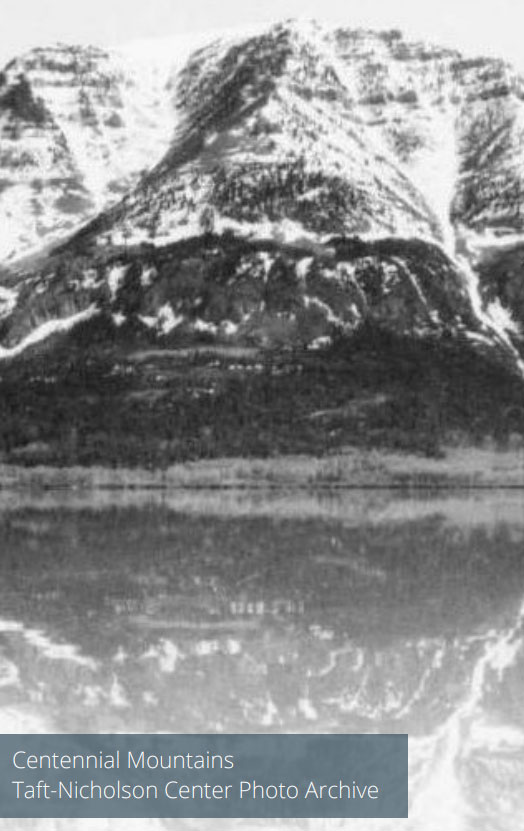 About 45 miles east of Lakeview, a large plume of magma lies below the surface in Yellowstone National Park. This magma plume is stationary but its relative location has changed due to the southwest movement of the North American plate above it. Over the past 16 million years, the Yellowstone hotspot has traced what is now the eastern Snake River Plain, shaping the landscape and leaving behind evidence of volcanic activity. It has caused three major eruptions since reaching its current location beneath Yellowstone about 2 million years ago. In the present era, it fuels the park's hydrothermal features that attract millions of visitors each year.

The Yellowstone hotspot is also responsible for the creation of the Centennial Mountains. Pressure builds as the magma plume pushes against the earth’s crust and is relieved in the form of cracks, or stress faults. One such stress fault can be found at the base of the Centennial Mountains. The mountains were uplifted in response to the pressure from the Yellowstone hotspot, and they now stand about 3,000 feet above the valley floor. The valley itself is sinking along the fault line, at a rate of about 9 inches for every 1 inch the mountains rise.

An additional fault in Centennial Valley has effectively divided the mountain range in half. This fault line runs north-south below Odell Creek. The mountains to the east of the Odell Fault experience greater uplift than those to the west, resulting in steeper north-facing slopes on the eastern portion of the Centennial range. There is also a vast difference in the age of the exposed rock on either side of this fault line. On the west side of the fault, the face of Mount Baldy contains rock that’s about 50 million years old. The rock layers exposed on Sheep Mountain, just to the east of Mount Baldy, are 350 million year old limestone. When you look at the layers near the top of Sheep Mountain, you are seeing the remnants of an ancient seabed. Despite the ancient rock that they are comprised of, the Centennial Mountains are very young, geologically speaking, estimated to be around 2 million years old. Long-gone glaciers helped carve the peaks, leaving cirques and moraines as evidence. Today, these mountains continue to be shaped by wind, rain and snow. They in turn help shape the microclimate and ecosystem of the valley below.

The Impacts of Avalanches

A small avalanche was recently spotted near the Taft-Nicholson Center. While this miniature event did not cause damage, it is a good reminder of what snow is capable of. Several avalanche chutes, areas where avalanches have toppled trees and cleared a path through the forest in previous winters, scar the Centennial Mountains. Avalanches can occur when a weak layer lies beneath a cohesive layer of snow. When a trigger causes this weak layer to crumble, the slab of snow sitting above it is sent sliding down the slope, sometimes reaching speeds over 80 miles an hour.

Avalanches can be highly destructive forces of nature, and at the same time, they help shape montane ecosystems. As is also the case with wildfires, the destruction leaves potential for new growth. Ecosystems rely on such occasional disturbances, which allow for varied habitat and increased biodiversity. New vegetation can grow in the newly cleared areas. Shrubs growing in avalanche chutes draw in grizzly bears and other foraging animals. Smaller critters seek shelter in the downed trees. In some cases, avalanche chutes can even act as a fire break. However, also similar to wildfires, climate change may affect avalanche occurrences and duration of avalanche season. Scientists have been working to better understand how avalanches work, and how changes in avalanche seasons would impact these montane ecosystems.

Check out more pictures and videos from Odell Creek, and our other trail talks, on our Instagram page @uofutaftnicholsoncenter. Happy trails!

Spring may still feel like a long way off, but some birds are getting an early start. Certain species that are able to find enough food in the winter months may start nesting in February. Ravens and Clark's Nutcrackers are two such species. They are both members of the Corvid family. Corvids are known for their intelligence and resourcefulness, which makes surviving the winter a little less challenging and contributes to these birds' early breeding seasons. Thanks to their winter food caches, Clark's nutcrackers have a reliable food source for their young.

Great horned owls also have an early nesting season. Winter is a great time to hear mating pairs calling to each other as they establish their nesting territory. Great horned owls are not known for their nest building skills. They use old nests built by other species, often red-tailed hawks or ravens. By breeding and laying eggs so early on, great horned owls give their young the chance to learn all the skills necessary for a successful independent life come fall.

Don't forget to apply for our faculty fellow residency! Residencies are available to tenure-line faculty in all disciplines for 1-3 weeks of dedicated writing time for scholarly pursuits or creative projects. Fellowships are available July 1 through July 31. Applications are accepted until March 31st.

Find us on Social Media