"Montana is a state of the Union. And here, in a lovely valley surrounded by high mountains, are the Red Rock Lakes, which nature has designed especially for swans." — E.B. White, "The Trumpet of the Swan"

Just north of Monida Pass, exit zero on Montana's stretch of Interstate 15 leads to a cluster of old uninhabited buildings in Monida. The Utah & Northern Railroad, the first to reach Montana, laid tracks across the Continental Divide and the pass on May 9, 1880. This now quiet outpost straddling the rails served as a station and became a large livestock shipping operation, transporting as many as 100,000 sheep and 48,000 head of cattle from summer ranges.

From 1898 to 1913, tourists would disembark from trains to meet the Monida-Yellowstone Stagecoaches that would ferry them to Yellowstone National Park. They spent the night in Monida at Summit Hotel and left via M-Y Stage the following day. Four- or six-horse Concord stagecoaches trotted through the Centennial Valley, refreshing stock every 15 miles at relay stations. These stations included stables, barns and driver's quarters. A lunch stop at Shambow, now Lakeview, was the halfway point.

From this now remnant of a bygone era, a dirt road winds its way east through windswept, treeless hills before easing down into the Centennial Valley. Today's highway follows the same route the coaches took.

If it weren't for one of the gems of the National Wildlife Refuge System, Red Rock Lake NWR, very few travelers would make their way through this remote basin. There are no stores, no fuel and no cellphone service. It's a high lonesome country of ranches, the refuge and a step back into a quieter time.

North to south the valley stretches 15 miles and is 45 miles long east to west. Peaks of the Centennial Mountains and the Continental Divide rise on the valley’s southern flank. The lofty mass of the Gravelly and Snowcrest ranges guard the drainage’s north side. The average elevation is 6,600 feet. 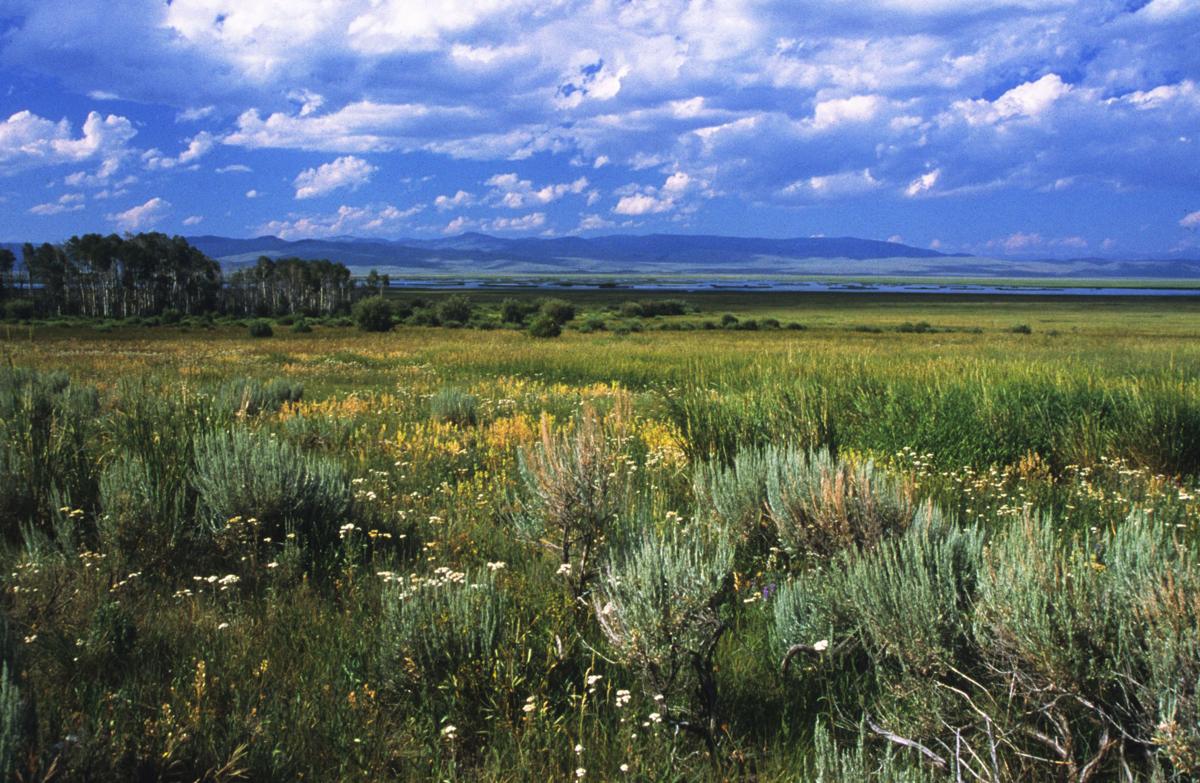 Most prominent in the viewscape are the Centennial Mountains, as the road through the valley makes its way on the south side of the range, hard up against the abruptly climbing slopes. They form the Montana-Idaho border and claim about 60 miles of the Continental Divide National Scenic Trail. Mount Jefferson, 10,203 feet, is the highest peak. Nine others top 9,000 feet.

The farthest traceable headwaters of the Missouri River originates its flow in these mountains. A trickle from a spring just below the divide descends a waterfall into Hell Roaring Creek, which then flows into Red Rock Creek. It in turn meanders through Upper and Lower Red Rock Lakes into Red Rock River and eventually, by way of the Beaverhead and Jefferson rivers, to Three Forks to power the now-formed Missouri River.

Elevation and location put the Centennial Valley in the path of frequent snowstorms and frigid temperatures. Winters are harsh, and for much of the cold season, the road is closed, buried under deep snow. Then comes spring bursting with a grand mix of color as wildflowers vibrantly carpet the valley floor in mosaic patterns. And autumn is equally splendid as the numerous groves of aspen dress in their finest gold.

This expanse of a biologically intact landscape protects critical migration routes for wildlife throughout the Northern Rockies. The nexus maintains links between the Centennial and the protected wildlands of Yellowstone, Central Idaho, the Crown of the Continent and Canada.

Riparian areas, meadows, creeks, sandhills and the two lakes make up the 51,386-acre Red Rock Lake National Wildlife Refuge, of which 32,350 acres are designated wilderness. To be consistent with wilderness values, the U.S. Fish and Wildlife Service manages its lands in the valley as primitive and wild, without many amenities. This practice provides as much solitude and isolation as possible, benefiting wildlife and enjoyment by humans.

The unique sandhill habitat found on the northern perimeter of the refuge are remains of the floor of a glacial lake that once occupied the valley. Winds from the southwest and west blew the sand into hilly formations. The breezes also carried seeds with them, and now plants found nowhere else in Montana grow in the sandy soil. It is a 1,400-acre preserve managed by the Nature Conservancy.

In the 1930s the 66 trumpeter swans living here were thought to be the last of their breed. This almost-extinct population led to the creation of today’s refuge. Now, in summer, approximately 280 trumpeters live in the valley’s waters. Around 25 or 30 stay through the winter in the warm open-water springs created by geothermal activity.

A myriad of other wildlife also call this valley home. Moose, mule deer, elk, pronghorn, lynx, grizzlies, black bear and wolves reside, frequent and pass through the country. The riparian areas and sagebrush-covered flats and hills provide habitat for the densest breeding population of peregrine falcons and ferruginous hawks in Montana, as well as a healthy population of bald eagles and osprey. Westslope cutthroat trout live in Red Rock Creek.

Another species contributes to the refuge's uniqueness. Upper Red Rock Lake is the southernmost point in the range of the Arctic grayling. The lake's fish are the last endemic populations of adfluvial fish that spawn in tributary streams and migrate at age 1-4 into the lake system.

June and August are best for observing the greatest diversity of wildlife. July usually has mosquito and biting fly problems. The month of May can be excellent as birds are returning, but the weather may be cold and the land muddy. Early fall is also a pleasant time to explore the region, but from late November to the first weeks of April the valley roads are usually blocked by snow.

Bands of Blackfeet, Crow, Flathead, Bannock, Nez Perce, and Shoshone Indians frequented the valley. It was their hunting and fishing grounds when the snow melted in spring and before the fall snows arrived. J.V. Brower related in his 1897 book, "The Missouri River and its Utmost Source," "The Bannock Indians had, for an unknown length of time, maintained trails on their hunting expeditions from the headwaters of the Big Hole River eastward to Red Rock Lakes, past Henry Lake to Targhee Pass and the Yellowstone locality." At one time, there was an abundance of bison grazing the valley floor. Observable evidence such as tepee rings were left behind where they could return year after year to use the same rocks. 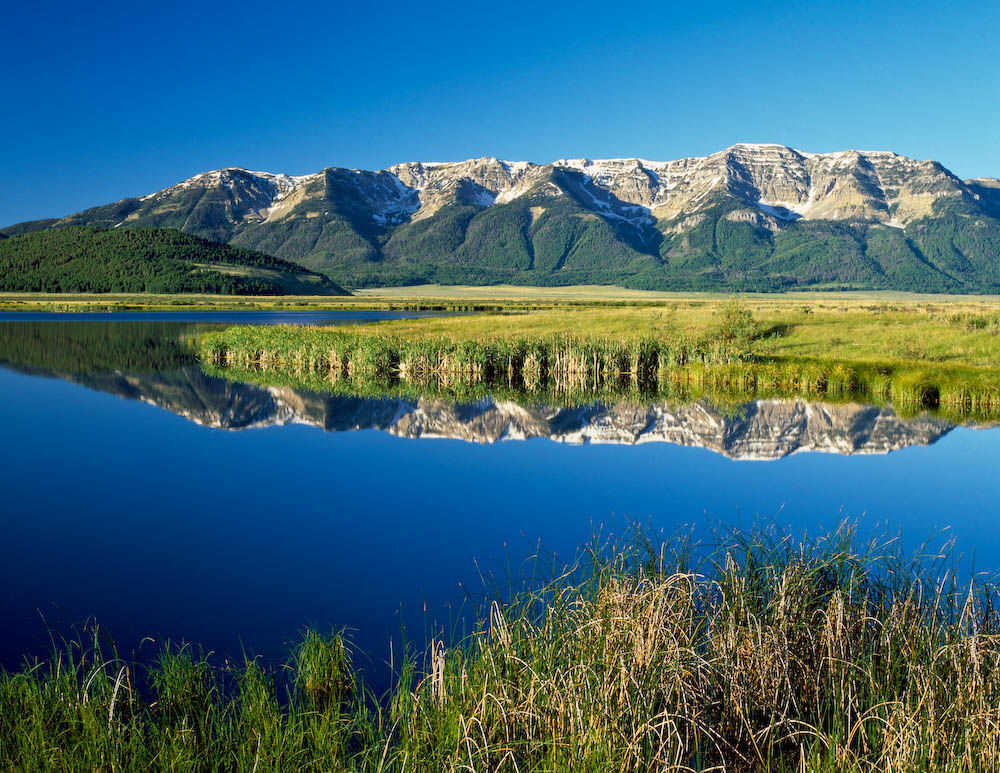 The Centennial Mountains abruptly rise from their valley floor above Widgeon Pond in the Red Rock Lakes National Wildlife Refuge near Lakeview.

Many artifacts have been collected through the years proving indigenous people were in the valley long ago.

Early white presence in the basin included Osborne Russell, a trapper who was in these mountains and valleys between 1835 and 1839. According to a map in his book, "Journal of a Trapper," his travels brought him down O'Dell Creek Canyon where “camp commenced in a smooth valley surrounded by a high range of mountains. He encountered many buffalo and a marshy lake that flowed into the Jefferson Fork of the Missouri.”

Cattlemen first ventured into the region in 1876, establishing some of the oldest ranches in Montana. Records show that it was named the Centennial Valley in 1876 by rancher Rachel Orr in honor of the nation's centennial independence celebration.

Earlier, in the late 1880s near Upper and Lower Red Rock Lakes, homesteaders began claiming land, birthing a new community. Levi Shambow, being the first permanent resident, gave the place his name: Shambow. Magdelen replaced that tag, followed by the current identification, Lakeview. It began as a small community of homesteaders who raised sheep, goats, cattle and horses and grew crops.

During the Homestead Era of the early 1900s, Lakeview and the surrounding area was home to almost 400 people. The town had stores, saloons and a hotel. Hunting and fishing lodges came and went, as did other businesses. It's now headquarters for the wildlife refuge.

Drought years and the Great Depression of the late 1920s and 1930s, coupled with the struggle against harsh winters and isolation, ended most of the population's hopes. Many of the homesteads were bought out as land was acquired for the wildlife reserve. As a result, the town withered with the consolidation of land and the departure of full-time residents from the Centennial Valley. Lakeview soon became a ghost town.

However, early in the 21st century, Lakeview was to experience new life. In 2005, the ghost town was purchased and restored by John and Melody Taft and Bill and Sandi Nicholson, which they generously gifted to the University of Utah in 2013. As of 2014, it became home to the Taft-Nicholson Center of Environmental Humanities, operated by the University of Utah, to bridge the arts and humanities with the sciences through academic study, fieldwork and community engagement.

Montana's Nature Conservancy has a strong presence in the Centennial, managing a growing number of conservation easements on non-refuge land. One-third of the landscape is privately owned by families who share the same goal — to conserve the land's integrity that benefits ranching and wildlife. As good stewards of this landscape, they have helped it appear much the same as it did a century ago.

In the winter, just a handful of people inhabit the area. The summer human population is usually fewer than 100 — and cattle far outnumber them.

Visitation to this beautiful southwest Montana valley, although not significant — estimates are 12,000 people came through in 2020 — is increasing in all areas of interest. It offers vast forests, mountains, sagebrush steppe, grasslands and the most extensive wetlands complex in the Greater Yellowstone Ecosystem. Here is a southwest Montana treasure.